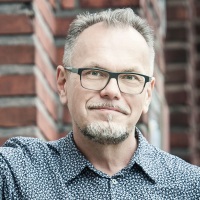 Jarmo Eskelinen is a smart city and open data expert with a background in architecture, digital media and urban events. He is based in the University of Edinburgh as the Executive Director of the Data Driven Innovation programme. The 15-year, £660m initiative spans across ten industry domains from creative industries and healthcare to fintech and robotics, building five new innovation hubs connected to supercomputing infrastructure. The DDI programme is part of the £1.3bn Edinburgh City Region Deal.

Previously Jarmo has been the Chief Innovation and Technology Officer of the Future Cities Catapult from 2016, founder and CEO of Forum Virium Helsinki innovation lab 2006–16, Executive Director of the Media Centre Lume of the Aalto University 2001-06, and the Head of Programme of the Helsinki 2000 European City of Culture.

Jarmo is a member of the Smart London Board, board member of Open Knowledge International, founder and former vice chair of the Open & Agile Smart Cities network OASC and former President of the European Network of Living Labs ENoLL.

He loves cycling in cities, and as an ex-DJ still buys more vinyl records than he has time to listen to.