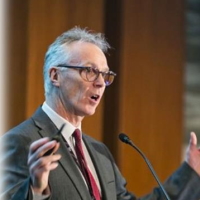 Paul Dunn received a PhD in Physics from the University of Birmingham in 1979 and was awarded a Nato Scholarship for research in the USA at the Institute of Optics at the University of Rochester, NY where he spent four years as a lecturer and researching into image processing.  He also taught Physics and Mathematics at the Rochester Instutute of Technology.
He returned to the UK in 1983 to work as a consultant before joining Third Dimension as Technical Director, developing holograms and optical technologies for a variety of applications.
He joined Applied Holographics in 1988 developing the team and facilities forming the basis of all origination and optical developments.  In 2000, Applied acquired OpSec Security and Paul developed his role as Technology Director as the company evolved and his role focussed more towards R&D.
He has been involved in the Optical Security industry for over 30 years with an array of experience in teaching and technology development.  He has maintained a particular focus on the development of technologies for new optical features, origination technologies, product applications and materials for which he holds many patents and over 40 publications.  In 2018 he was award the Brian Monaghan Award for
He is currently Director of Technology Innovation at OpSec Security Ltd and is the Chairman of the International Hologram Manufacturers Association (IHMA).  He also holds an MBA.

The future for optical security