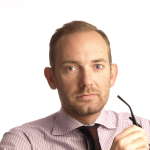 After graduating  from Ecole Centrale Paris as an engineer in real-time computing, Nicolas Goniak founded a software company in medical imaging, resold lately. He headed towards the security industry by joining Sagem, now Idemia, where he led hardware and software product lines ranging from IT security to national ID cards, all combining a high level of cryptography and biometrics.
Nicolas has been working for the French Ministry of Interior for nearly 6 years, where, as director for border control applications, led smart Borders projects that paved the way to the entry/exit regulation, set up, at the national level, a sound technical and regulatory environement, and build strong partnership with airports which led them to the successful rollout of e-gates in French airports, and, lately, to the move to facial recognition.
He is now the voice of the ministry of interior’s services point of view in the matter of European IT systems in the challenging context of the regulatory move towards an effective and genuine Security Union. Still with a strong risk/security-management oriented set of mind, he got recently closer to the concerns of the operational services (border, law enforcement, migration, police, visa, …), of the carriers, and of the citizen, by leading the national impact assessment study on the effective outcome of the latest regulation on visa, entry-exit, travel authorization, criminal records, police cooperation, and interoperability.
In the context of a pending Brexit he raised the attention of the European decision circles on the upcoming issues surrounding cross-Channel border checks, on the necessary inclusion of carriers (train, sea, bus) in the implementation discussions and on the opportunity of making preboarding business processes converge between PNR, iAPI  on one side and EES, VIS and ETIAS on the other side.