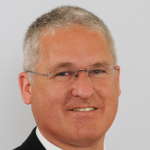 Andreas Schilling joined the Optical Technology Group of OVD Kinegram AG in 2001, where he developed visual security devices and machine readable features for the KINEGRAM® in ID-document and banknote applications. From 2010 till 2016 he was heading the Design & Origination department and became in 2016 part of the management as global Head of Sales. He received his MS degree from Portland State University, USA, in 1994 and graduated with a diploma in physics from the University of Konstanz, Germany, in 1996. He obtained his PhD in the field of diffractive optics and micro-optics in 2000 from the Institute of Microtechnology in Neuchâtel, Switzerland. He is author and co-author of various publications and patents in the field.