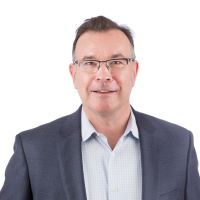 Robert M. Mungovan has over 20 years of experience with Aware. Prior to his current role as Chief Commercial Officer, Mr. Mungovan served as Aware’s Vice President of Biometrics and as the Sales and Marketing Manager of Biometrics and Imaging. Before joining Aware Mr. Mungovan held positions in several small companies whose focus was digital imaging and machine vision. His passion of working with customers led him on a gradual path from engineering to sales.
Mr. Mungovan’s first responsibility at Aware was to sell and market an Aware-developed technology for fingerprint image processing. From that initial responsibility he has played an instrumental role in the establishment of Aware as a premier standalone American biometric product company. Mr. Mungovan received his Master’s degree in Business Administration from Boston College, his Master’s degree in Engineering from Worcester Polytechnic Institute, and his Bachelors’ degree in Physics from Boston College.