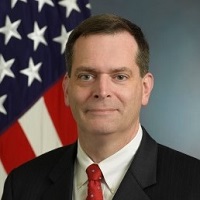 John M. Boyd serves as the Assistant Director, Office of Biometric Identity Management (OBIM) for the Department of Homeland Security (DHS). OBIM is the lead entity within DHS for biometric identity management services. Leading the Futures Identity team, Mr. Boyd’s responsibilities include overseeing science and technology activities related to biometrics and identity services and executing special projects with interagency and international partners, industry, and academia. He brings to DHS the skills, knowledge and experience accumulated over 40 years of continuous service from four careers.
As the organization’s Chief Science Officer, he is the principal advisor to OBIM on scientific issues. As its Scientific Integrity Officer, he oversees implementation and improvement of scientific-integrity policies and processes.
As a civilian, Mr. Boyd has held varied roles, including line manager for ECS Federal, LLC, leading an Agile software development team focused on the Federal Bureau of Investigation’s Combined DNA Index System (CODIS) software. He also served as a program manager for Battelle Memorial Institute, supporting both Joint Staff J-8 and then Navy Headquarters Staff in the field of chemical, biological, radiological, and nuclear defense as well as anti-terrorism/force protection. Additionally, Mr. Boyd managed highly hazardous chemical plants for a variety of companies across the United States.
Prior to his role with OBIM, Mr. Boyd served as the Director, Defense Biometrics and Forensics, within the Office of the Under Secretary of Defense for Acquisition, Technology and Logistics/Assistant Secretary of Defense for Research and Engineering at the Department of Defense. Mr. Boyd was responsible for conducting Secretary of Defense Principal Staff Assistant-level responsibilities for oversight of all aspects of the defense biometric and forensic enterprise.
As a Captain in the U.S. Navy, Mr. Boyd served on active duty as the Director, Naval Identity Management, on the Secretary of the Navy staff. He collaborated with numerous Government departments in advancing technologies, policies, and human factors to improve the application of digital identities. Captain Boyd drove development of a handheld biometric device supporting Navy, Marine Corps, and Naval Criminal Investigative Service operational needs. Previously, he commanded the Reserve Component unit of Navy Headquarters Manpower, Personnel, Training, and Education.
Mr. Boyd holds a Bachelor of Science in Physics from Virginia Military Institute and Master’s of Art degrees from the Naval Postgraduate School in Operations Analysis and the U.S. Naval War College in National Security and Strategic Studies. He served on active duty in the U.S. Navy Submarine Force from 1982 to 1994 and in the U.S. Navy Reserves until 2012.