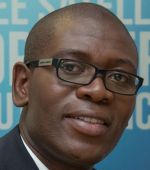 Takalani Maxwell (Max) Nonge holds the position of a Managing Director at Platco Digital. His responsibilities include recruiting channels to ensure that the company meet its target in line with the business strategy and objectives. His technical expertise ensures that Platco's uplink facility in Cape Town, STB specifications, Rules of Operations, and satellite capacity and all other related technical issues are in place and ready for launch. He makes sure that these are properly maintained on an on-going basis.

Previously with e.tv as Group Executive: New Business and Platforms, his core responsibilities were to provide guidance and leadership to the e.tv Digital Terrestrial Television (DTT) Project. He was also responsible for business development for the eAfrica channel where e.tv operates in 12 countries in Africa.

At Sentech, Max was General Manager of Operations and Maintenance. His duties included end-to-end management of Sentech networks nationally. The position had 389 direct staff with Capex estimated at R2 billion and annual Opex estimated at R550 million. Between April and end-August 2010 he was acting Executive: Network Services as and when required responsible for the Operations & Maintenance, Engineering, and Project Management for the company.

Max is an electronic engineer by training, he is married with two children.