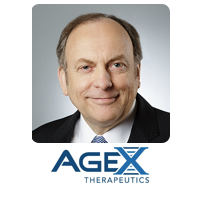 Michael D. West, Ph.D. has focused his academic and business career on the application of developmental biology to age-related degenerative disease. He is founder and CEO of AgeX Therapeutics, a biotechnology company focused on the emerging field of interventional gerontology. He formerly served as CEO/Co-CEO at BioTime, a regenerative medicine company, for ten years, and prior to that he held various positions including Chairman, CSO and CEO at Advanced Cell Technology, which was re-branded as Ocata Therapeutics and acquired by Astellas Pharma in 2016 for $379 million.
In 1990 Dr. West founded Geron (Geronology) Corp with backing from VC firms Kleiner Perkins, Venrock and others. While at Geron he created the research consortium that led to the first isolation of human embryonic stem cells and recruited for its scientific team Drs. Elizabeth Blackburn, Carol Greider and Jack Szostak, who collectively went on to win the Nobel Prize in Medicine.
Dr. West received a B.S. Degree from Rensselaer Polytechnic Institute in 1976, an M.S. in Biology from Andrews University in 1982, and a Ph.D. from Baylor College of Medicine in 1989 concentrating on the biology of cellular aging.
Dr. West has penned numerous articles for peer-reviewed scientific journals and is the author of The Immortal Cell: One Scientist's Quest to Solve the Mystery of Human Aging (DoubleDay, 2003). He has been a guest on NBC’s “Meet the Press” and has testified before the U.S. Congress on the lifesaving potential of regenerative medicine.