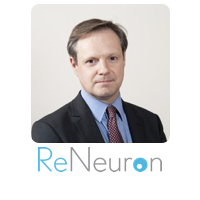 Michael Hunt joined ReNeuron in 2001. Between 2005 and 2014 he served as its CEO, leading the business through its early development to its current position as one of the global, clinical-stage leaders in the regenerative medicine field. He was appointed Chief Financial Officer in 2014.

Prior to ReNeuron, he spent six years at Biocompatibles International plc (sold to BTG plc) where he held a number of senior financial and general management positions. His early industrial career was spent at Bunzl plc. He read economics at University College London and qualified as a chartered accountant with Ernst & Young