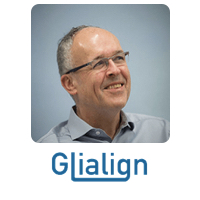 John Sinden cofounded Glialign Limited with Dr James Phillips in 2018. He has 20 years experience in the scientific development and commercialization of regenerative medicine products. He was a scientific co-founder of AIM-listed ReNeuron and from 1998 to April 2019 was CSO and was integral to all significant ReNeuron fundraisings. He remains Senior Scientific Advisor to ReNeuron. Prior to founding ReNeuron and becoming its first employee, he was Reader in Neurobiology of Behaviour at the Institute of Psychiatry at Kings College London. He graduated in Psychology from the University of Sydney and completed a Ph.D. in Neuroscience from the University of Paris at the Collѐge de France. He subsequently held post-doctoral appointments at Oxford University and the Institute of Psychiatry prior to joining the permanent staff of the Institute in 1987. Dr. Sinden is an Honorary Professor in the Faculty of Medical Sciences at University College London and the University of Exeter Medical School. He has over 140 scientific publications and book chapters. He holds Fellowships of the Royal Society of Medicine and the Royal Society of Biology.