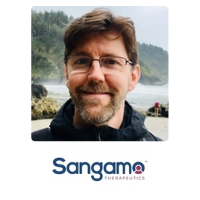 Greg Davis, Ph.D., is the Vice President of Genome Engineering at Sangamo Therapeutics, where he sits on the senior leadership team and leads the zinc finger protein (ZFP) design and technology team, genome engineering, and gene therapy. Prior to joining Sangamo, Greg was a research and development group leader for 16 years at Sigma-Aldrich in St. Louis (known since 2015 as MilliporeSigma). There he and his colleagues focused on the development of new genome editing systems including RNA-guided group II introns (2004), zinc finger nucleases (2007), and CRISPR (2012).  From 2008-2012, Greg’s team collaborated closely with Sangamo to develop and deploy new ZFP synthesis processes to support the world’s first genome editing reagents for human cell engineering applications in academia, biotech, and pharma. In 2012, his team was the first to file data on CRISPR-based integration of synthetic DNA into the genome of human cells. From 1998-2003, Greg worked to develop technologies for directed protein evolution at Clontech Laboratories in Mountain View, CA. He received his B.S. in Chemical Engineering at the University of Texas, Austin, and his Ph.D. in Chemical Engineering at the University of Oklahoma.