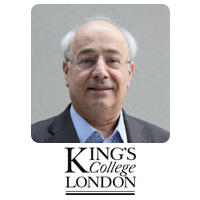 Farzin Farzaneh, Professor of Molecular Medicine, Kings College London Having studied at universities of Aberdeen and Sussex, followed by a number of fellowships by Beit, EMBO and MRC, in UK and Holland, I Joined King's College London in 1985. I was appointed the founding head of the Department of Molecular Medicine in 1993. Was awarded a Personal Chair in Molecular Medicine in1996, elected to the Fellowship of the Royal College of Pathologists and to the Royal Society for the Encouragement of Arts, Manufacture & Commerce in 1997, and the Society of Biology in 2011. Having been a co-founder of the International Society for Cell and Gene Therapy of Cancer (ISCGT), I have served as its Secretary General 2001-2006, and its President 2007- 2008. I have published over 200 scientific papers and two edited books on the Functional Analysis of the Genome and Cancer Gene Therapy. I have also established and served as the director of a GMP facility at King’s College Hospital London since 2001, producing Investigational Medicinal Products (IMP) for cell, gene therapy and regenerative medicine clinical studies. I have been the European Editor for Experimental Biology and Medicine since 2006 and on the editorial and advisory boards of a number of other journals and biotechnology companies. Current research interests include the functional analysis of the genome, the study of immune biology of cancer and development of cancer immune therapy.

GET READY TO GO VIRTUAL