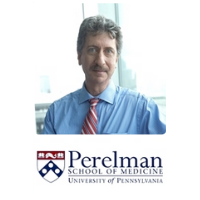 Dr. Bruce Levine, Barbara and Edward Netter Professor in Cancer Gene Therapy, is the Founding Director of the Clinical Cell and Vaccine Production Facility (CVPF) in the Department of Pathology and Laboratory Medicine and the Abramson Cancer Center, Perelman School of Medicine, University of Pennsylvania. He received a B.A. (Biology) from Penn and a Ph.D. in Immunology and Infectious Diseases from Johns Hopkins. First-in-human adoptive immunotherapy trials include the first use of a lentiviral vector, the first infusions of gene edited cells, and the first use of lentivirally-modified cells to treat cancer. Dr. Levine has overseen the production, testing and release of 3,000 cellular products administered to >1,200 patients in clinical trials since 1996. He is co-inventor of the first FDA approved gene therapy (Kymriah), chimeric antigen receptor T cells for leukemia and lymphoma, licensed to Novartis. Dr. Levine is co-inventor on 27 issued US patents and co-author of >180 manuscripts and book chapters with a Google Scholar citation h-index of 86. He is a Co-Founder of Tmunity Therapeutics, a spinout of the University of Pennsylvania. Dr. Levine is a recipient of the William Osler Patient Oriented Research Award, the Wallace H. Coulter Award for Healthcare Innovation, serves as President of the International Society for Cell and Gene Therapy, and serves on the Board of Directors of the Alliance for Regenerative Medicine. He has written for Scientific American and Wired and has been interviewed by the NY Times, Wall Street Journal, Washington Post, NPR, Time Magazine, National Geographic, Bloomberg, Forbes, BBC, and other international media outlets.