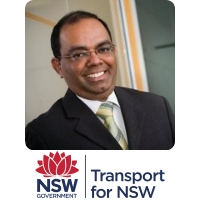 Sudath is a member of the Australian Senior Public Service with valuable experience in Major construction, Infrastructure development and Business operations and Management. He is working as a Senior Rail Professional for the unique Precincts and Infrastructure Group of TfNSW. Sudath Graduated from University of Moratuwa, Sri Lanka specialising in Civil Engineering and is a Chartered Civil Engineer.

He started his career as a Civil Engineer in the Department of Buildings Sri Lanka. He played a key role in more than 10 major
projects in designs and project management during this period.

Sudath joined DFCC Bank, Sri Lanka later on and gained experience in every aspect of Project financing. He managed a finance portfolio exceeding 300 million Rs during this period. On completing his MBA (Finance & Marketing) from UTS Sydney, he joined Maga Engineering, Sri Lanka as the Senior Manager (Operations & Business Development) and provided the business development leadership to make Maga the leader in the construction industry.

Sudath joined Ceylinco Group of companies, Sri Lanka as the General Manager/CEO of The Finance Property Developers and Ceylinco Prosperity companies and managed an investment portfolio of Rs 200 million with sustainable profits. The companies he managed were well known for delivering quality luxury houses.

Sudath migrated to Australia in 2002 and started his career as an Asset Manager of Burger King Restaurant chain setting up new restaurants and managing operations. He joined the Rail Industry in 2004 as a Design Engineer in RailCorp, the leading Rail operator of NSW. He managed the Macdonaldtown stabling yard project and the rail procurement project during this period.

He played a key role in managing the design finalisation of the unique Sydney Light Rail Project from 2014 to mid-2016. Sudath played a key role in completion and handing over of iconic Wynyard Station upgrade project, which won several excellence awards in 2017. During this period of time, he has established a reputation as a great communicator and a problem solver.
Sudath has demonstrated following special skills during his career

Sudath is looking forward to share infrastructure development skills he
has gained in Australia, with Rail Live 2019.