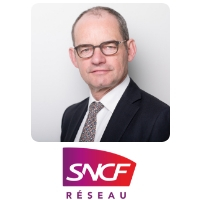 Patrick Jeantet’s career began in 1986 when he joined the Bouygues Group as Works Director for major projects in both France and abroad (Channel Tunnel, Pacific Place in Hong Kong, Charles de Gaulle bridge in Paris, Cergy-le-Haut station, etc.). In 1993, he moved to the Vinci Group to head the branches of its SOGEA subsidiary in eastern and southern Africa specialising in infrastructure projects, where he was instrumental in injecting new life into the company’s international development.

In 2005, he joined Keolis, first as Deputy CEO and then as Managing Director with responsibility for International Affairs. In this capacity, he was tasked with developing and overseeing Group railway concessions in the UK, Germany, the USA and Australia.
In 2011, he was appointed Managing Director of Keolis France, where he proceeded to reorganise operations and gain a large number of contracts.

At the end of 2013, he took up the position of Deputy CEO at ADP (Paris Airports Group), where he was involved in drawing up the regulatory agreement and ensuring its implementation as part of the Group’s strategic plan. He was directly responsible for preparing and enforcing the investment programme and for supervising the engineering and international divisions.

In May 2016, he was appointed Deputy Chairman of the SNCF Executive Board and Chairman & CEO of SNCF Réseau. On 20 April 2017, he signed a performance contract with the State giving SNCF Réseau its first-ever long-term visibility and taking rail network renewal investment to a brand new level.

Patrick Jeantet is one of the protagonists in the Railway Reform Act adopted by the French Parliament on 27 June 2018. The Act represents major progress in that it includes provision for the State to take over 35 billion euros of the SNCF Réseau debt.

In July 2018, at the end of 18 months of preparations, Patrick Jeantet unveiled a new strategic plan codenamed “Nouvel’R”  This plan is geared towards making SNCF Réseau into a cutting-edge 21st century industrial group by means of innovation and by transforming the railway network into a sophisticated high-performance system.
Patrick Jeantet (58) is a graduate of the École Polytechnique and the École Nationale des Ponts et Chaussées.
As one of the world’s leading passenger transport and freight logistics groups, employing a total of over 270,000 people in 120 countries, SNCF recorded a turnover of 33.5 billion euros in 2017, of which one-third was earned outside France. Its core business is essentially in France where the Group’s skills and experience in organising transport services are targeted towards making it the national and international mobility and logistics benchmark.

Within the SNCF Group, SNCF Réseau has the role of managing, developing, modernising and marketing the services offered on the national rail network.  It is responsible for ensuring safety and performance on nearly 30,000 km of line, including 2,600 km of high-speed line. SNCF Réseau has a 55,000-strong workforce and its turnover in 2017 was 6.5 billion euros http://www.sncf-reseau.com.