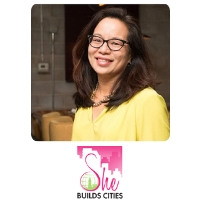 LESLIE WOO, founder of shebuildscities.org, has led a career elevating and inspiring other women to step into the spotlight. Her blog, showcasing women city builders, is a legacy project following her Fellowship with the International Women’s Forum.
By 2030, five billion people will live in cities and half of these will be women. This rapid urban migration makes shebuildscities.org an important forum. Women in particular, believe that they can improve their status, position, and their children’s opportunities by seeking work and educational opportunities for themselves or their children in cities. Billions of women have an important role to play in building the cities of tomorrow.
Named one of Canada’s 2017 Top 100 Most Powerful Women and the 2015 Outstanding Leader by Canada’s Women’s Infrastructure Network, Leslie has gained an international reputation for her views on the future of cities and the importance of women’s role in leading that future. She is a central figure in shaping urban growth and development in Canada’s fastest growing urban region, Toronto. Having worked in the public, private and not-for-profit sectors, Leslie’s unique perspective as an architect, planner and community development catalyst has enabled her to lead complex infrastructure programs, guided by robust policy and a sensibility for an inclusive work culture. She has been a vocal champion and mentor, pushing the stereotype of transit and infrastructure industry leadership.
Leslie has been a magnet for young professionals in planning and city-building. As an adjunct professor at the University of Toronto’s School of Architecture, Landscape and Design, through to her role as a founding member of the Civic Action Emerging Leaders Network (ELN) and presently as a mentor with the Urban Land Institute’s Women’s Leadership Initiative and the International Women’s Forum, she continues her mission to see more women have a impactful role in cities around the world.  In 2017, to help celebrate Canada’s 150th anniversary, Leslie contributed to numerous publications including, “Your Turn: Powerful Thoughts from Today's Women to the Next”.
Over the past decade she has been a leading mind for the regional transportation authority in defining the overall strategy for transit expansion with an initial public investment of $CA9.6 billion in 2009 to today’s $CA60 billion in heavy rail, subways and light rapid transit. She was the key author of the original Greater Golden Horseshoe Growth Plan (2006), which resulted in urban intensification totalling over 18 per cent increase in multi-family residential development, a two-thirds reduction of greenfield lands consumption, and conserved about 800 square kilometres of agricultural and rural land. She had a seminal role shepherding the tri-partite agreement that led to the establishment of Waterfront Toronto, the agency responsible for leveraging a $CA 2.1 billion public investment to regenerate the city’s waterfront. Her recent appointment as Chief Development Officer, to set up a new line of business in transit oriented development is a culmination of her decades-long city building expertise.
Leslie is a Global Governing Trustee with the Urban Land Institute. She has been named, one of Bisnow’s 2019 Toronto Power Women in Commercial Real Estate, and Spacing Toronto's Transit Change-maker in 2016. Leslie is a Director on the board of Womens’ College Hospital.
Leslie received a Bachelor of Environmental Studies, a Bachelor of Architecture and a Masters of Planning from the University of Waterloo. She is also the 2015 recipient of the Renison University College Distinguished Alumna Award. Born in Trinidad, Leslie is the mother of two thriving global citizens.

From Inspiration to Investment: The Changing Face of Influence

Leslie Woo / From Inspiration to Investment: The Changing Face of Influence

LESLIE WOO, founder of shebuildscities.org, has led a career elevating and inspiring other women to step into the spotlight. Her blog, showcasing women city builders, is a legacy project following her Fellowship with the International Women’s Forum. By 2030, five billion people will live in cities...