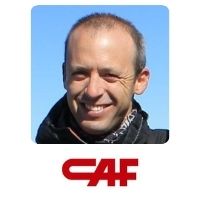 Jon Oiarzabal is Product line manager for Metro in CAF
Mr. Oiarzabal, Industrial Engineer, has developed his professional career in CAF and has occupied several management positions since he joined the Company as New Product Project Manager.
In 2007 he was promoted as Head of the Vehicle Area in the New Projects Department in Beasain Vehicle factory. In 2013 he became the Product Improvement and Standardisation Area Manager.
In 2015 he was in charge of Product Engineering Area Management, in 2018 he was promoted as Head of Platform and New-Project Management. In 2019, he was appointed Product Line Manager for Metro.