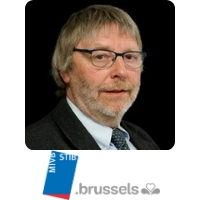 Frédéric Jans-Cooremans is a Project Manager at STIB, the Public Transport Company of Brussels. After vast experience in radio matters, he joined the company 7 years ago. Working in a group of signalling experts, his radio knowledge was used to write the tender of a driverless metro system based on radio interchange.

As a result, he participated at the launching of  the Spectrum Users Group of the UITP and took a role in the working group at the ETSI to share a frequency band with the ITS.

He was recently involved in the ECC mandate from the Working Group Frequency Management to provide a secure frequency band for CBTC, processing the highest priority of use in front of the ITS and Wifi band extension demands.

He moved from a day-to-day activity of the operational communications between the STIB vehicles and dispatching to the new Tetra project. Aiming to optimise and improve the radio network of the company, he is building the biggest private Tetra network of Belgium.

He is also taking care of the coherent use of the radio waves by the company and acted as an interface for the radio matters.

Recently, he moved to a general Project manager position, ready for new challenges in the embedded part of the rolling stock.

Delegates are invited to choose a topic or geographical region and then sit at the relevant table to discuss this among other industry experts.

Telecoms modernisation for CBTC in Brussels