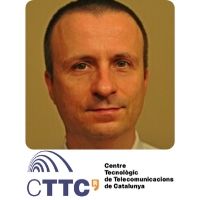 Carles Antón-Haro received his PhD degree in Telecommunications Engineering from the Technical University of Catalonia in 1998 (cum-laude). He also holds a Master in Business Administration (MBA) from EADA Business School (2014, Best Final Degree Project Award). In the pursuit of his PhD degree, he was a recipient of scholarship granted by the Dept. of Universities and Research of the Generalitat de Catalunya (1995-1998). As a Research Assistant (1994-1998, UPC) and Research Associate (1998-1999, UPC), he participated in several EC Projects (Tsunami, Tsunami II, Sunbeam), as well as in other projects funded by the Spanish government. In 1999, he joined Ericsson Spain, where he participated in two rollout projects of 2G and 3G mobile networks (2000, Regional Coordinator).  He was Teaching Assistant (UPC 1994) and Associate Professor (UOC 1998-2012), he has taught R&D Project Management (U. Krakow, U. Gdansk, 2012-2013) and he is a part-time lecturer in selected Business Schools like ESADE or European University (2016-present time).

Currently, he is with the CTTC as a Director of R&D Programs and Senior Research Associate. Main duties, in addition to his daily research activity, include the overall coordination of CTTC’s participation in R&D projects and technology transfer activities, networking activities towards the establishment of strategic alliances and formation of research consortia with the industry and academia, monitoring of R&D funding programs and fund-raising. In the past, he was also in charge of the recruitment of human resources at the CTTC, and he defined the internal processes in relation with CTTC’s project portfolio. Since 2001, he has promoted or coordinated over 80 R&D projects or proposals and has been directly involved in some of them (PAI-CTTC, IRACON, INTENSYV, P2P SmartTest, NEWCOM# -Co-Project Leader-, NEWCOM++, EXALTED, eCROPS –Principal Investigator-, ADVANTAGE, WINNER, ACE, to name a few). He is an appointed member of the International Scientific Advisory Board of the Internet Interdisciplinary Institute (IN3, Open University of Catalonia, 2017-present time). He has also acted as a reviewer of project proposals for various (inter)national funding agencies (e.g., AEI, ANEP, AGAUR, MIUR, ANR, ANVUR) and takes part in PhD Evaluation Committees on a regular basis. He maintains/has maintained scientific collaborations with selected R&D groups in Europe and overseas (U. Pennsylvania, U. Bologna, Politecnico di Milano,  U. Edinburgh, INSA Lyon, King Abdullah U., etc.).

He is an elected member of the Steering Board of the Networld2020 European Technology Platform (formerly known as Net!works, 2009-2014, 2020-present time) and representative at the 5G Infrastructure Association (2014). He was also a Steering Board Member of the 5G Barcelona Association (2017-2019). Currently, he is a Steering Board member of the 5G Infrastructure Association (2020-present time) where he also chairs the Working Group on 5G Trials. He recurrently participates in outreach activities (Catalan Science Week, Euro-science Open Forum ESOF), delivering talks and writing dissemination articles. He also coordinates CTTC’s involvement as an exhibitor in major industrial trade-fairs such as the Mobile World Congress (2017-present time).

His research interests are in the field of signal processing for communications, this including machine/deep learning for radio interface design, multi-user MIMO, networked control systems, wireless sensor networks, opportunistic communications, link layer protocols (MAC, H-ARQ); and estimation theory with emphasis in state estimation for Smart Electricity Grids. He has published +130 technical papers in IEEE journals, books/book chapters and in international and national conferences. He is a recipient of the 2015 Best Paper Award of the Transmission, Access, and Optical Systems (TAOS) Technical Committee’s (Green Communications Track, ICC). He has supervised a number of Master Theses and visiting students, as well as five PhD Theses (one in progress).

Understanding the 5G PPP in Spain

Carles Antón-Haro received his PhD degree in Telecommunications Engineering from the Technical University of Catalonia in 1998 (cum-laude). He also holds a Master in Business Administration (MBA) from EADA Business School (2014, Best Final Degree Project Award). In the pursuit of his PhD degree, he ...