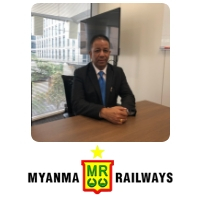 He has over 28 Years of experience in installation and project management on Railway Signaling and Telecommunication equipment including optical fiber laying around railway lines and 6 years more for Operating and Commercial Managements. He is currently working as Senior General Manager/Deputy Managing Director (Inspection) and also appointed Project Director for (5) Loaned Projects  for Myanma Railways, Ministry of Rail Transportation .

Besides, he had worked more than six years as interpreter for four consecutive HE Ministers at Ministry of rail Transportation including HE U Aung Min for National reconciliation tasks. He is also an international speaker for Rail Exhibitions and Conferences at local and abroad, such as Asia Pacific Rail 2014 Conference in Hong Kong and Smart Rail Asia 2015, in Bangkok ,Metro rail 2017,Wheel Detection Forum 2017 and International Railway safety Council 2017 at Honkong. Still more confirm to speak at Asia Pacific Rail 2019 in Hong Kong .

He had encourage to build a training center for Capacity Building as a donation of Sumitomo Corporation as of 60th Anniversary of Diplomatic relationship between Myanmar and Japan.
Now he is actively leading for operating functions of Myanma Railways and Railway restructuring ,rationalization and Modernization with assistance of Asian Development Bank (ADB).He is also leading for commercialization or liberalization of Railway Business with market oriented Economy.

Hobby
Keen to play golf with Handicap 9 for leisure and enjoy reading books and watching Movies.