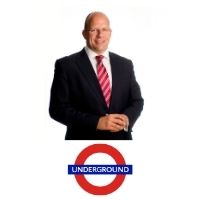 Andy is the Managing Director of London Underground (LU), the world's oldest underground
railway. He’s responsible for the safe, reliable and effective operation of the service, and for
delivering the priorities and objectives set out in the Mayor’s Transport Strategy and TfL
Business Plan. Made up of eleven lines, the Tube handles approximately 4.8 million
passengers a day, or 1.379 billion passengers every year.
Andy joined LU in November 2019, having spent nearly 30 years in the commercial aviation
sector.
Andy joined British Airways as a sponsored undergraduate in 1989, where he gained an
honours degree in mechanical engineering. His career there saw him take on varied roles
across engineering & operations, culminating as Director of Operations for just over 7 years.
Andy’s most recent position, prior to joining LU, was with Menzies Aviation where he was
Executive Vice President, with overall responsibility for all aspects of the business and
operations for the UK, Europe, Middle East, Africa and India.
Andy is also a Non-Exec Director for the Defence Equipment and Support Agency, the
bespoke trading entity & arm’s length body of the UK Ministry of Defence responsible for all
aspects of procurement & services for the UK Armed Forces.
Andy lives in south west London and is married with three teenage children. He’s an avid
England, Harlequins Rugby Union and England cricket supporter, as well as a poor golfer.
He enjoys travel and entertaining.