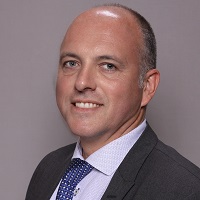 Vincent Georjon graduated in 1993 from ENTPE, École nationale des travaux publics de l'État (National School of Public Works) in Lyon with a Masters II (equivalent) Degree in Public Engineering, Specialising in Transportation Planning.  Vincent’s career began at the Infrastructure State Department in Nantes followed by Region Alsace in Strasbourg, as Chief of Intermobility Projects.  His experience was with tram-train projects, station planning and ticket fare construction.  In 2001, Vincent became the Transportation and Mobility Director for Nîmes Métropole, assisting with the design and creation of the then new transportation network, including a BRT project, the definition of the first sustainable mobility plan of this area (250 000 inhabitants).

After this complete experience in urban transportation, In 2007 Vincent joined SMTC-Tisséo as Director of the Network.  Tisséo Collectivités is the mobility authority responsible for the Metropolitan Area of Toulouse, with over 1M inhabitants.  His role was to organize and design the network; comprised of bus lines, metro subway and tramway.  In 2010, Vincent was promoted to Deputy General Manager of SMTC-Tisséo, which is the role he maintains today.

With the benefit of a strong team, in 2011 SMTC-Tisséo received the first Golden Pass award in France, and the best Sustainable Urban Mobility Plan in Europe in 2012. In 2013 the Tisséo network became the 3rd largest in France in ridership, after Paris and Lyon.

In 2015, Tisséo Collectivités decided to structure the future of its new mobility plan around a new metro line project, Toulouse Aerospace Express. This line will be 27 km long, connect 5 train stations, and provide the accessibility of about 200,000 jobs, mainly in the aerospace and innovation industries.

Since 2016, Vincent has been the Director of Toulouse Aerospace Express program

At each round table, the project leader will talk for 5 minutes, following the format as below The table will then move on to discussion for 25 minutes.
There will then be one rotation, giving participants the opportunity to have joined two round tables in total