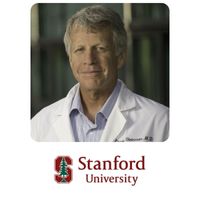 Dr Steinman’s work encompassing half a century has focused on how the immune system attacks the brain and has led to a number of breakthroughs in the area of multiple sclerosis (MS). Dr. Steinman discovered the target for the first approved therapy of MS with a monoclonal antibody, Natalizumab (Tysabri) targeting alpha4 integrin. His recent work elucidated how a virus, the EBV virus, triggers MS.

Dr. Steinman graduated from Harvard Medical School in 1973, where he worked with Nobel Laureates Torsten Weisel and David Hubel, publishing his first paper in 1971. He then moved to Stanford for clinical training in neurology. After 3 years studying chemical immunology at the Weizmann Institute in Israel under Prof. Michael Sela, he returned to Stanford where he has been on the faculty for the past 42 years. He continues to care for patients with neurologic diseases. He also chaired the Interdepartmental Program in Immunology at Stanford for 10 years.

In the 1980’s Steinman and his team isolated T cell clones which could mediate the disease a multiple sclerosis like disease in mice (Nature 1985. Nature 1986). These findings helped pave the way towards therapy to block T cell entry into the central nervous system via interfering with α4integrin. This work (Nature 1992) led to the successful development of Natalizumab, a revolutionary treatment which has improved so many patients’ lives with MS (Steinman Nature Reviews Drug Discovery 2005, Journal of Cell Biology 2012). Estimates of the numbers of MS patients treated with Natalizumab are well over 250,000.

Early in his career, Dr Steinman embarked on detailed molecular analysis of the disease, initially exploring the T cell and antibody repertoire to myelin proteins (Nature 1990, 1993, 1996). Particularly important has been the analysis of MS brain tissues early post-mortem, to explore the gene and protein expression in the lesions compared to elsewhere in the brain (Science, 2001, Nature Medicine 2002, Nature BioTechnology 2003, Science 2006,Journal of Experimental Medicine 2012). This has led to unexpected interesting and important insights into mechanism of pathogenesis (e.g. osteopontin, a receptor for α4integrin [Nature Reviews Immunology 2011) as well as unexpected mechanisms of homeostasis (e.g. activated Protein C [Nature 2008], αB crystallin [Nature 2007). Most recently Steinman and his colleagues discovered how the Epstein Barr Virus triggers MS, via molecular mimicry between the virus and a molecule in the central nervous system called GlialCAM (Science 2022; Nature 2022).

But Dr Steinman’s research is not limited to the laboratory, it extends into the clinic and biotech. He has been an ardent proponent of the concept that autoimmune diseases, targeting specific autoantigens should be treated in an antigen-specific fashion. He has developed new technology to vaccinate against autoimmunity, which has had some clinical success in a large phase 2 trial in relapsing MS (Annals of Neurology 2008), and is now being refined to target GlialCAM before advancing to a proof of concept trial in MS.

Steinman is the only neuroimmunologist elected to the US National Academy of Sciences, not just in the field of MS, but in any aspect of neuro-inflammation. Steinman is also an elected member of the  US National Academy of Medicine. He is an elected Fellow of the American Association for the Advancement of Science. He was awarded the Charcot Prize for Lifetime Achievements in MS in 2012, the Cerami Prize in 2015. Steinman served as the head of the Research Advisory Committee on Gulf War Illness for the US Veteran’s Administration for two terms from 2018 to 2022.

Dr Steinman’s work encompassing half a century has focused on how the immune system attacks the brain and has led to a number of breakthroughs in the area of multiple sclerosis (MS). Dr. Steinman discovered the target for the first approved therapy of MS with a monoclonal antibody, Natalizumab...