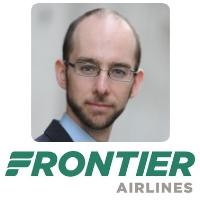 Mike joined Frontier in mid-2013 with responsibility for Ancillary products. In 2014, Frontier transitioned to the low-fare, low-cost model. In his previous position, as Ancillary Program Manager, he led the conceptualization, design, and introduction of Frontier’s ancillary bundle offers.

Between appointments at Frontier, Mike spent two years based in Nice, France, marketing Amadeus Airline IT’s offer management capabilities for airlines globally. He served as Amadeus lead for the paper “A New Formula for Success: Why Customized Offers are the Future of Airline Marketing and Revenue Management.” Mike has presented at more than a dozen airline conferences on topics ranging from application of academic research to opportunities created by NDC, all relating to customer-centric customized offers. Before joining Frontier, Mike spent seven years working closely with Amazon.com while building the ebook business for Oxford University Press, the world’s largest academic publisher.

Mike holds a degree from The University of Chicago. Mike and his wife were engaged in Namibia, married in Fiji, and their four-year-old son has visited 12 countries (with them).