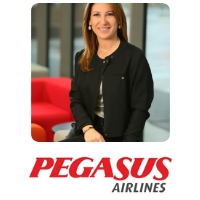 Güliz Öztürk began her career at Turkish Airlines. From 1990 to 2003, she served in various roles including as Manager of International Relations and Contracts, Alliance Coordinator, Sales and Marketing Director at Turkish Airlines. During that time, she managed important projects such as launching the first code-share flights, managing the alliance projects, launching the airline’s loyalty and bank card programs and its first website as well as implementing online ticket sales for the first time.

Between 2003 and 2005, Öztürk served as Aviation and Tourism Project Coordinator and Director of Human Resources at Ciner Holding.

In 2005, she joined Pegasus Airlines as Head of Sales and Marketing to manage the launch of the airline’s scheduled services. Since 2010, she has been working as Chief Commercial Officer responsible for the commercial department, which includes Sales and Network Planning, Marketing, Revenue Management, and Guest Experience.

After graduating from Kadıköy Anadolu Lisesi, Güliz Öztürk graduated from the Department of Psychology at Boğaziçi University then completed the Advanced Management Program at Columbia Business School in 2018. Güliz Öztürk is co-chair of the Women in Sales (WiS) platform, which was established in 2019 to ensure the balance between women and men in company sales departments.