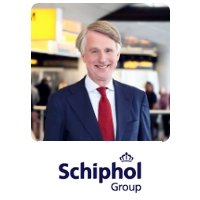 Dirk Anne (Dick) Benschop is President & CEO of Royal Schiphol Group, Non- executive member of the Board of Directors of Brisbane Airport Corporation PTY Ltd and Non-executive member of the Board of Groupe ADP (Aéroports de Paris). He joined Schiphol Group in May 2018 from Royal Dutch Shell where his most recent position was VP Non-Operated Ventures Shell International. Dick was born in Driebergen-Rijsenburg, the Netherlands, in 1957. He studied History at the VU University in Amsterdam, and worked in various functions in the Dutch Parliament and in the Dutch Labour Party. In 1994, Dick founded and worked for his own consultancy firm before returning to politics in 1998-2002 as deputy Minister for Foreign Affairs in the Dutch Government. Dick Benschop joined Shell in 2003 and worked for Shell Energy Europe before moving to Kuala Lumpur in 2006 overseeing the Gas & Power business in Malaysia. In 2009, he took up the role of Vice President Strategy for the Royal Dutch Shell Group. From 2011 to 2016, he was President Director of Shell Netherlands. Dick lives in The Hague, is married to Elisabeth and they have three children.