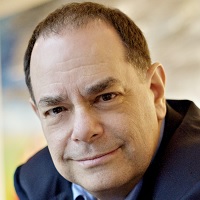 arc Prensky—coiner of the term “Digital Native” —is an award-winning, internationally acclaimed speaker, author, and “practical visionary” in the field of education. Today he champions an emerging new “Empowered to Better Their World” education paradigm that more directly benefits all students and the world they live in.  Marc has spoken in over 40 countries, authored seven books, and published over 100 essays; his writing has been translated into a dozen languages. Marc is the founder of The Global Future Education Foundation and The ARISE-NET.WORLD Real-World-Impact Education Network, uniting all groups in the world offering an “Empowered to Accomplish” education to kids. Previously in his career Marc headed an early prototype charter school. spent six years at the Boston Consulting Group, and founded and ran a learning games company for over a decade. Marc holds an MBA degree from Harvard (with distinction) and a Master of Arts in Teaching degree from Yale. He has taught at all levels, from elementary to college. Marc’s latest book, Education to Better Their World: Unleashing the Power of 21st Century Kids (Columbia TC Press, 2016) won the 2016 Foreword INDIES Book of the Year Awards in Education.