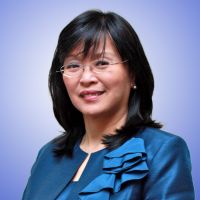 Dr. Padilla is Professor of Pediatrics at the College of Medicine and currently Chancellor of University of the Philippines Manila (www.upm.edu.ph). Recognizing her varied contributions to the academic growth of genetics in the Philippines, she was conferred Academician of the National Academy of Science and Technology in 2008.

Dr. Padilla is a pioneer in genetics in the Philippines and the Asia Pacific region. In the Philippines, she is responsible for setting up the clinical genetic services at the Philippine General Hospital in 1990 and the various genetic laboratories now housed at the Institute of Human Genetics – National Institutes of Health.  She is also responsible for setting up of national newborn screening services in the Philippines, currently available in 6000+ health facilities in the country.  In the Asia Pacific region, she is part of the pioneering group that established the Asia Pacific Society for Human Genetics and served as president in 2008-2010.  Dr. Padilla is Council member of the Human Genome Organization, an international organization of scientists from 69 countries.  In 2010, she was appointed country representative to the InterAcademy Medical Panel, a global network of more than 60 academies in the world.
Dr. Padilla has been a recipient of numerous awards. Dr Padilla has more than 120 publications. In the area of policy making, she is responsible for the Newborn Screening Act of 2004 (RA 9288). As Chair of the Philippine Society for Orphan Disorders, she joined the parents and professionals in the successful lobbying for the passage of Rare Disease Act of 2016 ( RA 10747).