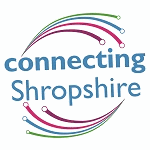 Shropshire is approximately ten times the size of all the Inner London Boroughs put together (31,929 hectares; source: ONS Census 2011), with a shade under one person per hectare (0.99 persons; 317,450 population; source: ONS mid year estimates 2017), for a terrain covering 319,736 hectares. Another way of putting this is to say that we have the same population as Nottingham, but we are 42 times bigger. An additional dynamic is that, unlike for example Cumbria, the population is dispersed across the entire county rather than there being any areas where no one lives at all.

If you are looking for Shropshire on a map of the United Kingdom, you will need to look to the middle of England on the map, and then to the far west of Birmingham, just next to Wales. Travel to work patterns across the porous borders indicate large numbers travelling for work to the West Midlands, to the South and East, and North and North West, to Cheshire, Staffordshire and Manchester and beyond, as well as into Wales.

Around 34% of Shropshire’s population lives in villages, hamlets and dwellings dispersed throughout the countryside. The remainder live in one of the 17 market towns and key centres of varying size, including Ludlow in the south and Oswestry in the north, or in Shrewsbury, the central county town.

Shropshire is the second largest inland county in England, after Wiltshire, and being inland also brings its own challenges. There is a dependency on a limited number of key arterial transport routes, for trade and supply including freight through the county to Wales and Ireland, or up to the North West, as well as for everyday transport for local communities and businesses. It is also quite literally exposed to extreme weather conditions, with roads that are liable to flooding, and a lack of viable alternatives leading to congestion and lengthy diversions. The physical terrain poses practical challenges for digital and physical infrastructure, as well as the high service delivery costs and access issues associated with a dispersed and ageing population. Despite the great work that local broadband programmes like Connecting Shropshire are doing, digital connectivity remains a real challenge in rural locations. 96% of premises in England now have access to superfast broadband (30Mbps +) – this rises to as much as 99% in a city location such as Nottingham, but is just 91% in Shropshire (source: Think Broadband).