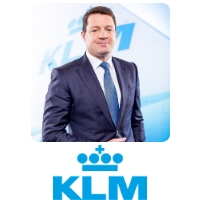 As Chief Executive Officer of KLM Royal Dutch Airlines, Pieter Elbers aspires to make KLM the most customer centric, efficient and innovative airline of Europe. His leadership style thereto is characterized by the conviction that the management of a company is a continuous balancing act between people, planet and prosperity.

Since he took up office as the Chief Executive Officer of the managing board in 2014, he is – together with his Executive team - leading KLM and its 33,000 employees through an intensive transformation.

In 2018 this has resulted in a record turnover of almost €11 billion and a profit sharing by the employees of € 168 million. With 164 destinations worldwide, the current network of KLM connects the Netherlands with the world and the world with the Netherlands.
‘The outside world is ever changing and KLM needs to keep up’.

Pieter Elbers considers continuous transformation to be vital when it comes to leading the airline to the next century of its existence after 2019. Hereby KLM focusses on technological innovation for both customer and employee, and the further development of alliances and partnerships, safeguarding safety in all instances. Another important strategic pillar for KLM is sustainability. As third private employer in the Netherlands, KLM doesn’t only strive to live up to its economical- or social position, but also to a position as a company that actually lives and breathes corporate responsibility.

After obtaining his engineering title, Pieter Elbers started his career with KLM in 1992 on the platform as Manager Aircraft loading. This was followed by several managerial positions in the Netherlands, Japan, Greece and Italy before he took up office as COO in the managing board of KLM. Next to his current role in KLM and as managing director of the Air France-KLM Group, he is a member of the Board of Governors of IATA and has a leading role in the Dutch business world as managing director of VNO-NCW.
He is married and has three kids. Convinced that a healthy m