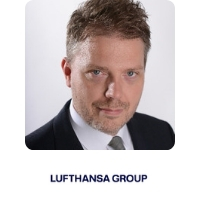 Oliver Bertram, born in Germany, began his career at Lufthansa Technik after his studies in Aeronautical Engineering at the University of Technology in Aachen and Imperial College in London. At Lufthansa Technik he was responsible for the reliability of aircraft engines and managed various transformation projects. After he has graduated in General Management (MBA) in 2011, he took over positions in Corporate Strategy and Business Development at Lufthansa Technik, Lufthansa Group and Austrian Airlines.

In 2016, Oliver became Head of Performance Development & Project Management at Austrian Airlines where he headed different strategic projects such as the establishment of LH Group wide project management standards or the introduction of the premium economy class at Austrian. In spring 2019, Oliver took over the department “Flight Ops Digital Strategy and Processes” at Lufthansa Group where he is responsible for strategy development and strategic steering of digitalisation and Ops efficiency initiatives across all Lufthansa Group airlines.

Oliver Bertram is married and has two children.