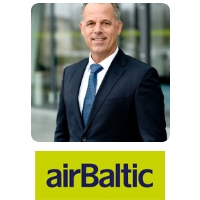 Mr. Martin Gauss serves as Chairman of the Board and Chief Executive Officer at Air Baltic Corporation AS (airBaltic), the Latvian airline, since November 2011.
Under the leadership of Martin Gauss, airBaltic has been successfully restructured and reached sustainable profitability.
The decision to acquire the all-new Bombardier CS300 aircraft in 2012 allowed airBaltic to become the global launch operator for this aircraft in 2016, benefiting greatly from the improved comfort level, increased reach and fuel efficiency of this new industry leading aircraft. Today airBaltic is the regional market leader serving over 3.5 million passengers annually.

Martin Gauss is a professional with more than 26 years of experience in the aviation industry. He began his career in 1992 as a B737 pilot of the British Airways subsidiary Deutsche BA. By 1995, he was working in the management of the airline. He was the manager of Flight Operations Support Department before he became the Post Holder for Ground Operations. In 2002, he was appointed Director of Flight Operations, taking responsibility for all flight crews and the whole Operations Department.

In 2004, after the sale of Deutsche BA to Intro Group, Martin Gauss became joint Managing Director of Deutsche BA (dba) and was responsible for the re-launch of the airline. Under his leadership, dba became profitable and in 2006, dba was sold to Air Berlin.