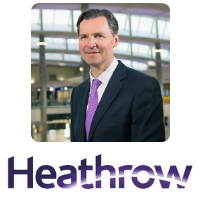 During his time as CEO, Heathrow has consistently improved service levels for passengers, while reducing costs, and it is now rated one of the best airports in the world. John has championed a third runway at Heathrow, building cross party and national support. In 2017 he launched Heathrow 2.0, a plan for the airport to become a centre of excellence in sustainable aviation. He has a keen interest in promoting diversity and social mobility, and is chair of the Business in the Community Employment and Skills Leadership Team. John is also a Non-Executive Director at Thames Tideway.

Prior to joining Heathrow, John worked in housebuilding in the UK and US, with Taylor Wimpey, and in brewing and leisure retail in the UK with Bass plc. His early experience was as a strategy consultant advising leisure and FMCG companies in the UK, US, Australia and the Philippines.

John is married with two daughters.