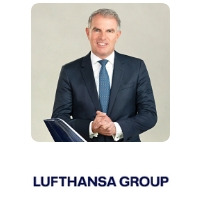 Carsten Spohr, born on 16 December 1966 in Wanne-Eickel, has been Chairman
of the Executive Board of Deutsche Lufthansa AG since 1 May 2014. He manages
the Lufthansa Group with the business segments NetworkAirlines, Eurowings and
Aviation Services with around 135,000 employees worldwide.

After graduating with a degree in industrial engineering from the University of
Karlsruhe, Carsten Spohr obtained a commercial pilot's license at the Lufthansa
Verkehrsflieger-Schule in Bremen and Phoenix. As a member of the central junior
research group, he then completed the trainee program at Deutsche Aerospace
AG, Munich.

In 1994 Carsten Spohr returned to Deutsche Lufthansa and initially took over the
management of central personnel marketing. From 1995 onwards, he served as a
speaker to the Chairman of the Executive Board until he assumed responsibility for
Lufthansa's regional partnerships in Europe in 1998. In 2000, Carsten Spohr was
appointed head of the alliance management of Deutsche Lufthansa. In this function, he was responsible for the management and coordination of Lufthansa's
worldwide cooperation partners, including the Star Alliance and regional partners.

Carsten Spohr holds the Lufthansa Captain's license for the Airbus A320 Family
air-craft types. He is married and has two daughters.